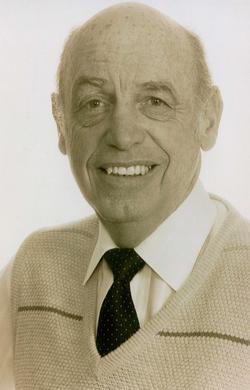 After succumbing to heart failure, Marshall passed away peacefully at Baptist Memorial Hospital with his children, grandchildren, and great-grandchildren at his bedside at 2:27 PM May 19, 2017.

Marshall was born and raised in Flint, Michigan and attended Principia College in St. Louis, Missouri. He served the country in the United States Army during World War II as an instructor in the canine corps as well as part of the guard detail for the famous Nuremberg trials.

Upon returning home, he joined Arthur Murray Dance Studio in Chicago as their primary instructor until 1953. Moving first to St. Louis in 1954 and then Oklahoma City in 1963 he founded All Sidings of OK in 1977, inventing and fabricating an exterior home improvement product known as”Okie Trim.”

Marshall was one of two children born of Barney J. McKye of Salem, OR. and Ada Alice Marie Comber of Selkirk, Manitoba, Canada. During his formative years, he was adopted and raised by his step-father, Paul Pillon originally of Sweden, whom he held in the highest esteem.

His zeal for both dancings as well as teaching others lasted right up to his 90th birthday. Visiting with family and friends, world travel, playing bridge, golf and a knack for comedic conversation were his favorite past times.

Marshall touched the lives of many with his curiosity, sense of humor, tears of joy, sense of business integrity and champion to those less fortunate in life.