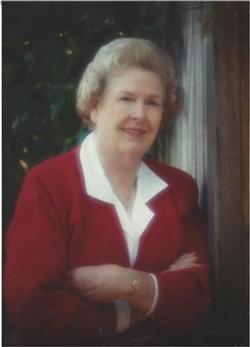 Mary Ellen Simmons passed away Wednesday, April 29, 2015 in Okla. City. She was born in Kingfisher, Oklahoma to Harry Lytle and Minnie Dean Jones Forney on September 23, 1922. She graduated from Kingfisher High School and attended Phillips University. She married Jack Bruner Simmons on July 29, 1941 in Wilburton, Oklahoma. Their children were Jack Bruner Simmons, Jr. and James Mulcahy Simmons whom they raised on the family farm.

Jack and Mary Ellen lived a short time in Los Angeles, California, then after World War II spent the remainder of their lives farming and ranching southwest of Cashion. Mary Ellen was an accomplished seamstress making many of Jack's and her son's suits and dress shirts. She devoted herself to maintaining her home, raising her family and helping Jack on the farm. She was active in several clubs, Eastern Star and the Methodist Women's Circle, and enjoyed serving as a state officer in the Home Demonstration organization. Mary Ellen was a member of the Cashion United Methodist Church for many years.

In later years Jack and Mary Ellen enjoyed travel, fishing, friends and their family, most especially their granddaughters, Michelle and Stacie. Mary Ellen was preceded in death by her beloved son Jack B., Jr., her loving husband Jack in December 2013, and her much loved siblings Thelma Dalrymple , Grace Irene Edwards, June Justice, and, William Forney.

Mary Ellen was a lovely lady who will be missed by her family, friends and the caregivers who have aided her so kindly. In lieu of flowers, memorials are suggested to Mt. Zion Cemetery Association, 26030 E 870 RD, Cashion, OK 73016 or the Oklahoma Medical Research Foundation, 825 NE 13thSt, Oklahoma City, OK 73104-9930.

Visitation will be held Sunday, May 3 from 1:00 – 8:00 pm.Funeral services will be at 10:00 am Monday, May 4, 2015 at New Hope Methodist Church, 11600 N. Council Rd. Okla. City, with Rev. J. D. Ward officiating, under the direction of Buchanan Funeral Service, Oklahoma City.Burial will follow at Mt. Zion Cemetery southwest of Cashion.