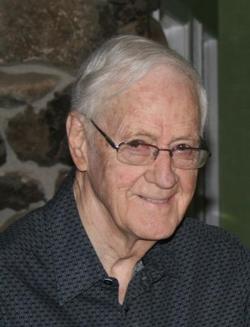 Rev. Paul McCullough went to be with the Lord on May 17, 2015. He was born July 12, 1927 in Dover, the tenth of eleven children. He grew up on a farm and attended Arnett schools, graduating in 1945. He served in the Navy during WWII and was ordained into the ministry at the age of 19. He married Betty Jean Myers in 1947 while attending Oklahoma Baptist University. After graduating, he pastored in Carney, Luther, Nash, Watonga and Pauls Valley. In 1974 he began his ministry with the Baptist General convention of Oklahoma, serving as the state Royal Ambassador Director and as the director of Camp Hudgens for 19 years before retiring. After the death of his wife Betty in 2002, he married Mary Jane Lake in 2006.

In lieu of flowers please make donations to Disaster Relief Ministry @ the Baptist General Convention of Oklahoma. The family will receive friends from 6-8 pm on Thursday, May 21 at Buchanan Funeral Service. A service to celebrate his life will be 10:00 am, Friday, May 22 in the chapel at Council Road Baptist Church.