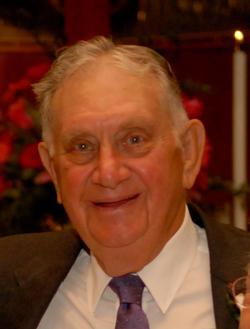 Robert J “Bob” Towe, age 91, passed peacefully to join his heavenly father on Thursday. He was born in Lockridge, OK to Banner and Marie Towe. He was preceded in death by his wife of 68 years, Virginia Towe, his parents, brother Wayne, and 3 sisters, Alma, Wilma and Ruth.

Bob graduated as salutatorian of Piedmont High School in 1942. He went on to join the Marine Corps in 1943 and was awarded a Purple Heart for his service in World War II. A sooner born and bred, Bob was an alumnus of the University of Oklahoma, graduating with a degree in business. He loved every single minute of his career as a CPA, working just two days before his passing. Bob loved water skiing, OU football, bowling, bridge, traveling, attending church at Grace UMC, and, above all, being with family. He was a member of the Southwest Oklahoma City Kiwanis Club for 55 years, impacting the lives of many people, including thousands of students through the Terrific Kids program in Oklahoma City and Moore Public Schools. In 1957, he was a charter member of the Oklahoma City All Sports Association and continued to support the organization for 60 years.

Visitation will be Wednesday, May 31, 2017 from noon to 8pm with family greeting guests from 5-7pm. A private graveside service will be 11:00 AM, Thursday, June 1st at Chapel Hill Memorial Gardens with a memorial service to celebrate his life at noon, Thursday at Grace United Methodist Church.