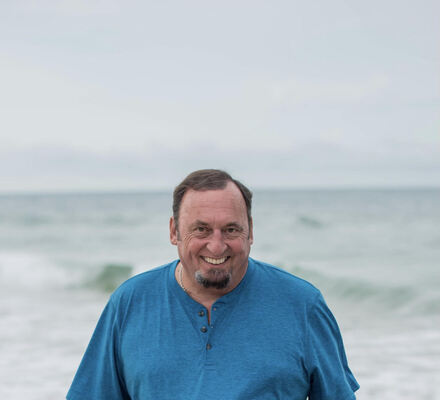 Larry was the son of Bob and Gwen Francis, who preceded him in death. He was born and raised in Kingfisher, OK, the fourth of five children.

Larry was the father of Matt and wife Ashley, their children Hudson & Hadlee. Kurt & wife Katie, their children Ayden & Gemma. Clint and wife Kaitlyn, their daughter Kora. He laughed as they experienced the fun and challenges of parenthood.

It’s hard to put into words all the different aspects of Larry. He was first and foremost a devoted father and grandfather. He had a mean left-handed tennis serve and backhand, could play any kind of drum, and was a great pool player. Larry loved listening to rock and roll on his 8 track player-which is still in working order, restoring anything on wheels, hunting, leather work, turquoise, and OSU.

When he was a little boy he became the original dumpster diver, bringing home treasures he found from various trashcans around town. He began learning how to take things apart and put them back together, which led him to become a master mechanic who could fix anything with nuts and bolts.

He was especially good with auto mechanics and loved all the cars he took apart and fixed, especially his ‘69 Roadrunner. He once drug Main with two of his buddies in his puddle jumper with the idle so low it took three hours to make the 8 mile journey up and back.

Working on vintage muscle cars was a favorite pastime and he used this time to impart some of his mechanical knowledge to his boys. He thoroughly loved hunting with his brother and sons. On annual beach vacations with family he enjoyed telling stories of his antics, playing with his grandkids, nieces, and nephews, and making his famous deviled eggs.

He was a dedicated son and took loving care of his parents throughout their lives. He was always in very close contact with his siblings, as well as his nieces and nephews, and willing to help any way he could.

His love of fireworks was legendary. He spent every year in anticipation of July 4th, where he fired off anything he could get his hands on, much to the delight and chagrin of his family, neighbors, and the local police.

Larry had an irreverent sense of humor and kept us all laughing. He had a quiet nature and never sought to be the center of attention, just loved observing and commenting on things others might not have noticed. The smile he put on our faces at every chance will be what we remember the most.