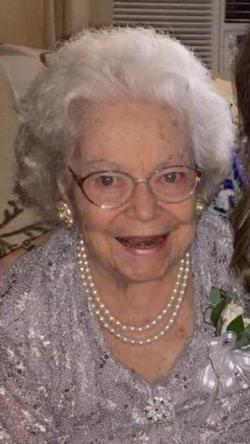 Roberta Jean Coate, age 92, born in Cushing, Oklahoma on May 30, 1924, went Home to be with her Lord on February 2, 2017 at 8:45 am. Roberta was born to Clarence Orville "C.O." and Mary Adeline (Wood) Powell. Her father worked for Champlin Oil which gave the family the opportunity to live in a variety of places throughout her childhood. Roberta met Lewis Dale Coate, Jr. in 1939 at the young age of 15, and they were married on April 11, 1943 in Enid, OK. Roberta and LD were devoted to God, their marriage and their family until the end of her life. Lewis served in the Army Air Corps during WWII. They settled in Oklahoma City after his return from the war where she dedicated her life to her faith and her family. She was an active member of Millwood Baptist Church in Oklahoma City until it was disbursed and, most recently, was a faithful daughter of Christ at Kelham Baptist Church. She served in many roles through her involvement in the churches including being a teacher at vacation bible school, facilitating Sunday school for preteens, serving as WMU (Women's Mission Union) President and a music director. She also found time between raising her family and supporting her church to pursue several careers including working as a legal secretary for Judge Irwin Box early in his career, working alongside her husband as a secretary and bookkeeper at the family owned business, L.D. Coate Lumber Company, serving as bookkeeper for Scott Refrigeration and sharing her talents and love for people by being a teacher at Stretch and Sew. Her hobbies included bowling, sewing, crocheting, ceramics, and playing cards and dominoes with her family and friends. Her beautiful alto voice graced many ears throughout her life. She was a two time breast cancer survivor and fought Alzheimer's for the last 7 years of her life. Roberta found great joy and fulfillment in her life primarily through creating a wonderful family and watching it grow. She loved to spend time with her children, grandchildren and great grandchildren. Nothing brought her more delight than sitting back at family gatherings and witnessing all the children running, laughing and playing, as well as visiting with her numerous family members while reminiscing about all the adventures of her life.