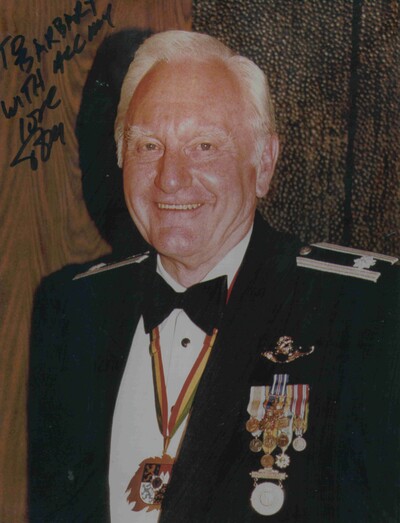 Thomas D. Smith III was born on October 30, 1931 to Mary and Thomas D. Smith II in Sabinel, Texas. T.D. grew up in San Antonio, Texas. As a young teenager he crossed paths with Ad Toepperwein, a famous exhibition shooter of the 1920’s and 30’s. For several years, Ad taught T.D. the art of pistol shooting. This learning experience sparked T.D.’s lifelong passion for shooting.

T.D. graduated from Alamo Heights High School and then went on to Abilene Christian University. During his education, T.D. shined as an athlete. He lettered 14 times in football and track and made all-conference twice. ACU named Smith Boulevard in his honor. In 2014, T.D. was inducted into the Abilene Christian University Sports Hall of Fame and awarded ACU’s Lifetime Achievement Award.

In 1953, T.D. enlisted in the United States Air Force and began his illustrious military career. He was promoted 16 times in 17 years. In 1955, T.D. graduated #1 in his class from USAF Jet Fight Pilot Instructor School and was retained as an Instructor Pilot. He continued to gain ranks and prove himself as a leader. In 1961, he was named captain of the USAF Pistol Team. In 1963, T.D. received the honor of being named the U.S. Jr. Chamber of Commerce USAF Outstanding Young Man. In 1966, T.D. was on a military flight over Greece when the plane he was on exploded. T.D. experienced a free fall of over 5,000 feet and somehow lived to tell the story. His instincts kicked in and he spent the next several days tending to the other injured men while they all waited on a rescue. The heroic acts that he performed in the four days between the crash and being rescued by a SEAL team earned T.D. several military honors. In his career he received: the Distinguished Flying Cross – Heroism, Airman’s Medal – Extraordinary Heroism, Air Medal (7) – Meritorious achievement while participating in aerial flight, “United States Distinguished International Shooter”- Solid Gold Medallion awarded by United States Congress, USAF Distinguished Pistol Shot, U.S. Army, Special Forces “Order of the Lion”, Martin Baker Lifesaving Award – Extraordinary Heroism, NATO 20th Anniversary Commemorative Award. He was the only military member ever awarded the United States’ highest awards for Non-Combat Valor and International Marksmanship. In 1979, T.D. retired from the United States Air Force as a Lieutenant Colonel.

The spark for shooting that started as a teenager in San Antonio went on to provide T.D. with unimaginable opportunities and experiences. He spent several years in competitive shooting and his talent is apparent when you take a look at the record books. From 1961-65, Smith won 36 individual state, regional, national and international pistol championships, breaking 79 National Rifle Association and world shooting records. He was a member of eight United States shooting teams in international competitions, including the 1963 Pan American Games where he won an individual and team gold medal and the 1964 Olympic Games, where he finished eighth in free pistol. He won five individual national shooting championships. The 1963 Pan American Games is where T.D. left his mark on competitive shooting history. It was there that T.D. set a world shooting record that will never be broken. Competing for the United States in the two-day pistol match, he was shooting on a course at targets the size of silver dollars and the second day at moving targets from a distance of 25 meters. He won the gold medal with a score a 597 out of a possible 600, besting the world record of 591 held at the time by a Russian. It was the first world shooting record set by a member of the United States Air Force and the first centerfire pistol world record set by an American. The Colt 1911 semi-automatic pistol that Smith used in the Pan American Games to set the world record is now on display at the NRA’s National Firearms Museum in Fairfax, Virginia. In 1988, the size of the shooting targets were changed and Smith’s world record set in the 1963 Pan American Games is now considered retired, never to be broken.

After his retirement from the Air Force, T.D. moved to Buffalo, Wyoming and married his 2nd wife, Ann Cusak. Wyoming was a great place for him to enjoy another passion of his, hunting. The game wardens in Wyoming even called on T.D. to help as a shooting teacher. After Ann passed, he moved to Oklahoma City. It was in Oklahoma City that T.D. met the love of his life, Barbara. After three years of dating, he decided it was time to marry. T.D. and Barbara married on Veteran’s Day in 1989. Barbara introduced him to some police officers and hunters and he the hunting he loved in Wyoming was off and running in Oklahoma. T.D. joined the OKC Safari Club, where he served as president for two years. He traveled all over the world to hunt, but for T.D. it was never about the trophies. He made sure that after every hunt, the meat was donated as food to those who desperately needed it.

T.D.’s life was shaped by his love for country, military and law enforcement. That influence continued in his later life where he spent time volunteering to help with training with the OKC Police, the Oklahoma Highway Patrol, and military snipers. He also spent time as an Olympic Coach and an ROTC Instructor. T.D. was a founding member of the Army Sniper Association. All the work that he was continuing to do, led him to see the need for an improved aiming system. T.D. spent years designing a reticle for long range shooting scopes. He received 10 U.S. patents, 2 trademarks and 5 copyrights for his “Tactical Stress Management” and “TDS Tri-Factor”. T.D.’s contributions changed long range shooting for both the military and hunting.

The life of Thomas D. Smith III was an incredible tale of passion, leadership, heroics and love. There is a potential project in the works that could tell T.D.’s story on a large scale.

The family wishes to thank the Oklahoma Highway Patrol Troopers and the staff at OU Medical Center ICU Trauma Unit, specifically the doctors and nurses for taking incredible care of T.D. and making his final flight in life comfortable and first class.

Visitation for T.D. will be on Wednesday, May 25th, from 1-8 PM at Buchanan Funeral Service. The funeral service will be at 11 AM on Thursday, May 26th, at Quail Springs Baptist Church with military honors and burial to follow at Resurrection Memorial Cemetery.