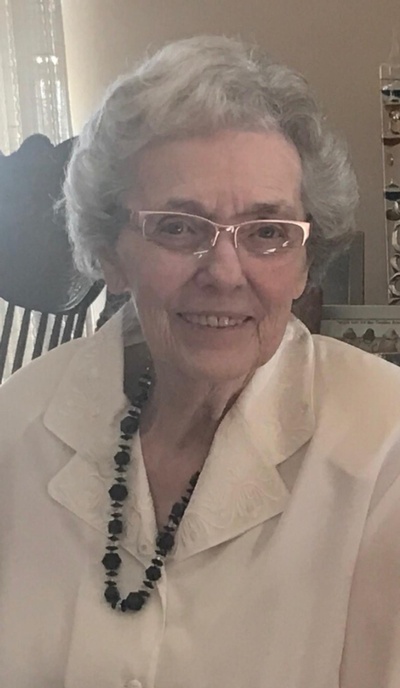 Loving daughter, sister, mother, grandmother, and great-grandmother, Willie passed away on March 14th, 2018 at the age of 91. Surrounded by her family at Mercy Hospital, Willie peacefully went to be with the Lord.

Willie, Clarence, and their family lived in Chickasha, OK for the first many years of their marriage. They moved to West Virginia in 1971 when Clarence received a job there as a hospital administrator. In 1973, Clarence died suddenly, and the family moved back to Oklahoma, this time settling in Duncan.

For the entirety of her adult life before Clarence died, Willie faithfully served as a stay-at-home mom. After Clarence’s death, determined to support her family, Willie took a job at the local Woolworths. Later she found an entry-level position at a bank, and found great joy serving in various roles there over the years. By the time she retired, she’d been promoted several times and was serving as the bank’s Trust Officer.

In 1984, Willie married Bill Sandwell. They lived in Duncan, OK for many years, until Bill preceded Willie in death in 2005. For most of their time together in Duncan, they lived on an acreage on the outskirts of town. Willie’s grandkids have loads of special memories from time spent on the farm.

For the past five years, Willie lived at St. Ann Retirement Center in OKC. Her years living at St. Ann’s were, Willie would tell her family, some of her best years. She loved the people there – both her fellow residents and the employees. Her family loved spending time with her at St. Ann’s, because they could see how truly happy she was living at a place that was so full of love and kindness.

For Willie Sandwell, there was nothing more important than faith and family. And Christmas Candy. A devout Catholic, Willie found great strength in the Lord, and served as a sterling example to her family of what it means to trust in His providence. Her family adored her, admired her, and loved her dearly. One of her favorite pastimes was gathering her family on the first weekend of December each year to create the most scrumptious Christmas candy in all the land.

In lieu of flowers, donations may be made to Mercy Hospice or a charity of your choice.

A rosary will be prayed in the chapel at St. Ann Retirement Center 7 pm, Sunday, March 18th, 2018

A Mass of Christian Burial will be celebrated at 10am, Monday, March 19th, 2018 in the chapel of St. Ann Retirement Center with burial at 1 pm in Holy Name Cemetery in Chickasha, OK.